Luis Enrique's side meet a serious rival for the first time this season as they travel to the capital without the suspended Gerard Piq...


Luis Enrique's side meet a serious rival for the first time this season as they travel to the capital without the suspended Gerard Pique, while Antoine Griezmann is determined

Barcelona return to a ground on which they won the first trophy of an incredible 2014-15 treble on Saturday, knowing that their credentials this season will be tested to the full by Atletico Madrid. 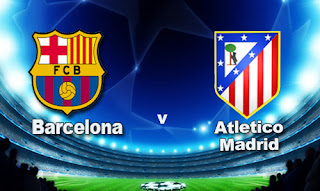 coach when a 1-0 win at the Estadio Vicente Calderon last May - courtesy of Lionel Messi's goal - gave the Catalans an unassailable lead at the top of La Liga.

But his side will likely be given another stern examination on their latest visit, with both teams having started the season strongly.

Barca have not been at their free-flowing best during the first two league games, although 1-0 victories against Athletic and Malaga have given them a platform on which to build their title defence.

Diego Simeone's men, meanwhile, followed up a hard-fought 1-0 win against Las Palmas with a 3-0 dismantling of fellow Champions League side Sevilla at the Estadio Ramon Sanchez Pizjuan.

Simeone helped Atleti to break the domestic dominance of Real Madrid and Barca by guiding them to title glory in 2013-14 - coincidentally their triumph on that occasion being wrapped up at Camp Nou.

While Atleti relinquished the trophy to Barca last season, there are positive early signs that they can once again muscle their way into the battle for supremacy this time around and forward Antoine Griezmann is well aware that his side have a chance to lay down an early marker in this match.

"Barcelona always have possession and we will try to press up, be strong at the back and then try to score.

"We had a very good pre-season and that helps us play well. Each time we're getting used to each other a bit more and everything seems easier on the pitch. I will continue to work as I have done and always serve the collective of the group."

One of the biggest surprises of the early season is that Messi - who scored 43 league goals last term - failed to find the net in the opening two games.

However, the Argentina superstar did score three times in four matches against Atleti last term - including that winner in the league-deciding fixture in May - and he will be expected to fire on all cylinders after hitting three goals in two games against Bolivia and Mexico for his country during the international break.

The respite from league action was perhaps less welcome for team-mate Gerard Pique, who has been at the centre of controversy in Spain following a barracking from some sections of the national team's fans due to his views on Catalan independence.

Pique was forced to call a hastily arranged press conference on Thursday to address the issue amid suggestions that he could quit playing for his country but he rubbished those claims - although he will still have to wait to get back in a Barca shirt.

The defender was banned for four matches in August after being sent off in the second leg of the Supercopa Espana against Athletic for insulting a linesman.